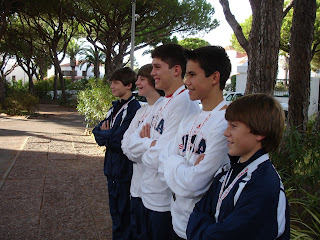 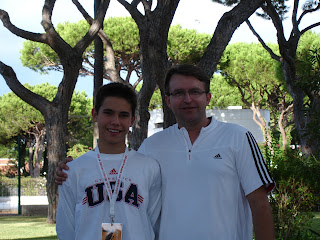 I am posting this picture of Noah and I from his trip to Portugal competing in the Loule' World Cup. It was there in a far away country that changed the path that Noah and I were on. It was there that Noah gained the incredible passion and was inspired to go farther and higher than any other boy his age and level. The experiences that he lived and the lessons he learned have catapulted him to new heights and taught him to think big and dream even bigger!
Noah is more prepared today with his routines and passes because of what he saw and what he witnessed during those many days watching and learning from the BEST in the world!
Also, as Noah's coach I learned SO much about him, this sport, trends to be looking for, techniques to be training, and overall the direction that we needed to be working in. I say this because this past weekend at the USAG Winter Classic Noah had a coming out that was unmatched anywhere by any Elite Athlete.
In the first Elite Qualifier of the 2012 season - Noah qualified directly into the USA Elite Nationals on both double mini & trampoline. He qualified in the top 5 with his compulsory routine, he qualified number one with his optional routine (by over a point), he performed the second highest DD (degree of difficulty) in the country, and finished the preliminary rounds in first place overall! Noah just performed with the BEST in the USA and he came out on TOP! His hard work, total dedication, and focused mind took him to the top of the charts!
The interesting note to all of this - that was all just on trampoline...
Noah also put on a show and had a coming out on double mini that was also almost unbelievable.
He performed some of the most difficult passes in the Elite Group(s), performed all with perfect
lines and great landings, and after the preliminary rounds he was qualified into finals on both events! That was also a first for him - FINALS on both events!
Then in finals he found some needed inner strength to perform a pass that was new for him and something that he hasn’t even done back in the gym...In typical Noah fashion - he nailed two more passes and with all four passes added up he jumped into the Bronze Medal position in just his first Elite Double Mini Finals ever! Noah was and is the Elite to beat right now, and with is new DD, perfect lines, and inner passion to be the "best", he is going to take himself to new and amazing heights!
We are all SO proud of you and what you just accomplished! Keep focused, working hard, thinking big and dreaming even bigger, and keep your goals and dreams centered and in your
mind at ALL times!
Here is another picture of Noah lined up just before he competed in the World Cup that I love
so much. It is a great shot of him and all the USA Boys before we jumped onto the bus to the arena. I am using these pictures because this is where I believe Noah truly leaned and gained the inner belief in himself. It was here that Noah started to actually believe in World & Olympic Dreams and it was here that Noah witnessed the Chinese National Team putting on a show that NO country could compete with! Because of ALL the above Noah now believes that he can someday return and compete with those World & Olympic Champions...
Noah you are "one in a million" and we are all blessed to have you in our presence
each and every day. Keep doing what you are doing and keep leading in such
amazing ways...
Posted by Scott at 8:47 AM